Odd Jobs hasn’t shown up yet, regrettably. Never heard back on which Bataille to tackle Tuesday in case of this contingency, so I’m just going to suggest we do a fairly short piece of his on “The Definition of Heterology”. If you’d like more (totally optional) reading to flesh out this idea of Bataille’s, you might also look at the essays “Base Materialism and Gnosticism”, “Use Value of D.A.F. de Sade”, or “The Psychological Structure of Fascism”; all of which are in the collection Visions of Excess (also included in this week’s filebin in both pdf and epub to suit your pleasure). But, for Tuesday, let’s just plan to focus on “Definition of Heterology”. I do hope you all enjoy it. See you soon, friends.

Next week, we’ll take a look at the writing of two of the fiercest and most inspiring bêtes noires currently attacking systems of domination and submission, especially as they manifest in the apparatuses of contemporary art: Alexander Brener and Barbara Schurz. Alex and Barby (hailing from Russia and Austria, respectively) have become infamous over the last few decades as among the most uncompromising enemies of the artistic establishment out there. They’re notorious for interrupting exhibitions, gallery openings, biennials, etc. around the world with their anarchic and often intentionally incoherent antics, frequently going as far as vandalizing or straight up destroying pedestrian and high-value artworks right in front of their creators; all the while refusing any critical debate or dialogue with these ubiquitous gatekeeping charlatans.

They have also written and illustrated some utterly inimitable texts in a variety of languages. Of these texts, we’ll be looking at a few essays from their book The Art of Destruction, but I’m also including a pdf of their unforgettable novel Bukaka Spat Here — as mind-flaying a work of fiction as you will ever encounter. If we all feel up for it, perhaps we can take on the latter sometime in the near future. However, for next week, let’s plan on discussing the pieces “Uncertain Rebellion”, “The art of destruction: Dances on the bosses‘ heads”, “Illegal Pleasure”, and “Means of Destruction” from The Art of Destruction. That may sound like a lot, but all together it totals less than thirty pages, and GODDAMN are all those pages bad as shit. There’s truly not a dull piece in the entire book, so if you just can’t get enough, you might also take a look at the essays “Who is John Zerzan?” for their thorough evisceration of everyone’s least favorite lapsarian ex-leftist and “How it happened with Mike Kelley” for a first-hand account of their confrontation with one particular artistic donkey. The pdfs of Bukaka and Art of Destruction can be found HERE.

I’m also including links to some additional material concerning these marvelous degenerates, in case you find your curiosity piqued. First, I highly recommend watching Mark McGowan (The Artist Taxi Driver) recounting the couple’s downright baffling appearance at a panel hosted by the ICA in London (the first part of the video found HERE). The youtube channel rombix1 has a number of fantastic VHS recordings of actions performed by Brener during his Moscow Actionism days; the best of these include “Date”, where he and his first wife attempted to fuck in Pushkin Square in broad daylight while a crowd looked on (only to ultimately find the weather too cold to consummate this), THIS action, where Brener shat directly in front of a Van Gogh before walking out, THIS one, where he took a hammer to some asshole’s work, and THIS performance, where he appeared nude with a stocking over his face and proceeded to scream “Why was I not invited to participate in this exhibition?” at the pieces of art on display. He was involved in fellow Moscow Actionist Oleg Kulik‘s somewhat well-known performance “Mad Dog”, where Kulik crawled naked on all fours and menaced passers-by while Brener held the leash (video HERE). At THIS LINK you can watch the couple causing trouble at a Vienna gallery in 2014, or reading a text in Berlin back in 2004 HERE. Photos from their recent exhibition of illustrations “Conspiracy of the Cephalopods” can be viewed on THIS PAGE. And lastly, you can watch Brener performing their piece “Die Rede” (“The Speech”) at Steirischer Herbst 2019 by clicking HERE.

For additional texts by these two, I point you to their pieces “Anti-Technologies of Resistance”, “Prague Street Clashes as a Major Work of Art”, and “Third World Artist” as well as to UK publisher Vargas Organisation, where you can snag physical copies of many of their publications. You might also look at Lisa Nersesova’s essay “Third World Artist: The Performance Art of Alexander Brener”, which offers a detailed summation of Brener’s actions and describes his infamous vandalism of Kazimir Malevich’s painting “Suprematism: 1922-27”, for which he served time in prison.

In case you couldn’t tell by the obnoxious length of this post, these two have left a profound influence on my conceptions of art, writing, and anarchy and are especially dear to my heart. I hope you’ll find as much to admire and appropriate from their delirious assault on culture and authority as I have. Enjoy! 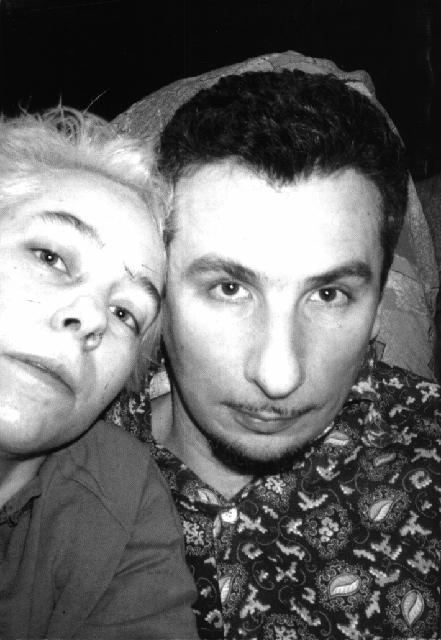 Next week we’ll look at Borges’ Book of Imaginary Beings. Your homework is to compose a short poem, story, drawing, or other hunk of artistic detritus based upon one or more of the fantastic creatures in this bestiary and bring it on Tuesday to share. Now go create!

I apologize yet again for the late post. The last week has been quite stressful. So friends, I ask that you bear with my tardiness one more time, and thank Ajay for his reminder to post.

I couldn’t find the Unica Zurn piece we discussed in digital format, so here’s some Rikki Ducornet instead. From her book of essays The Deep Zoo, let’s discuss the first two pieces: “The Deep Zoo” and “Books of Natural and Unnatural Nature”. Provided HERE in both pdf and epub, as suits your pleasure. Looking forward to seeing you all soon and enjoying a bit of delight after an especially shitty week.